I mentioned at the end of my last post that I was going to be talking about the upcoming OMG SUPER BLOOD WOLF MOON (Yes, it’s really called that; yes, you have to say the OMG; and yes, you have to all-caps yell it EVERY TIME.), so here I am with the astro-details on that. I also have a cool new partnership I want to tell you about, so read on! 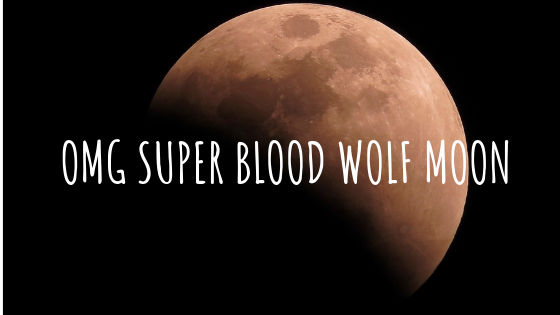 This Sunday, January 20th at 10:36pm EST, the first full moon of the year, the Wolf Moon, will be close enough to Earth to be called a Super Moon, and will also go through a full lunar eclipse, making it a deep red color – a Blood Moon. Add all that up and you’ve got an OMG SUPER BLOOD WOLF MOON!

Aside from being having a badass name and conjuring up images fit to be painted on the side of a metal cover band’s windowless van, this lunar event will also be impacting the astrological forecasts for all of us. I spent some time this week researching what this means, and I don’t think it’s hyperbole to say that OMG LIFE AS WE KNOW IT IS ABOUT TO GET REEEEEEAAAAAAL INTERESTING.

Eclipses happen in pairs and they hit opposite signs over the course of two years when they do. This eclipse, which will hit sun sign Leo, is part of the Leo-Aquarius eclipse series that began February 10, 2017, and which includes the amazing full solar eclipse that hit on August 21, 2017.

Now, Leo tends to represent royalty, high leadership, and the privileged elite, while Aquarius – its celestial opposite – represents the common people, humanitarian efforts, and activism and uprisings. Think back on the world events of the past two years and the clashes between these two opposing groups. Think about the tensions becoming greater and greater between them as the time has gone on. Sunday’s lunar eclipse will close out this cycle, and it won’t happen without some upheaval on its way out.

In the world, we may see the beginnings of the fall of leaders, we may see secrets exposed and subverted situations coming to light unexpectedly. We may hear news out of Buckingham Palace, Washington, D.C., Russia, or Geneva. There will be a large shift on Sunday and into the early hours of Monday morning, and there will definitely be worldwide drama left in its wake.

As for what this lunar eclipse means for each of us personally, it can be very different for each sign. What will be consistent for us all, however, is the inconsistency: change. Eclipses mean shift, change, adaptation, but they also mean opportunity. Look to your sign and in your life to see what new opportunities lie ahead after our worlds get SUPER BLOOD WOLF MOON-ED. You can definitely find more in-depth information out there on the interwebs about what this lunar eclipse shift will mean for you personally, but I suspect that by the time Monday gets into full swing, we will all be starting to see the impact in one aspect or another!

Another cool thing I get to do is hanging out with the ladies of Girl’s Girls Media, Brittany and Meredith. Their Girl’s Girls Podcast is smart, funny, and my favorite hour every week – and that’s just the weeks I don’t spend recording with them! Starting this week, I get to be a recurring “friend of the pod”, and the girls’ Armchair Astrologer!

Check out the pod, subscribe, give it five stars, join the Patreon community, and tell your friends. It’s so much fun, and the people I’ve met through the Girl’s Girls Community Facebook group are seriously the most wonderful women on the planet. Consider this post an early eclipse-related opportunity for change!

Be safe this weekend – I know many of us are expecting a blizzard on top of an OMG SUPER BLOOD WOLF MOON – and keep your heart, mind, and soul open to the possibilities that an eclipse will be bringing our way.

While I learn to overcome the past and manifest greatness, and align my spine and chakras or whatever-the-hell in the present, I find myself also looking to the woo-woo for a peek into the future. What does this year hold for me, and for the world around me? Is there a way to know how to proceed when there’s so much up in the air? Can I at least learn to interpret the blueprints of what the universe might be trying to show me? 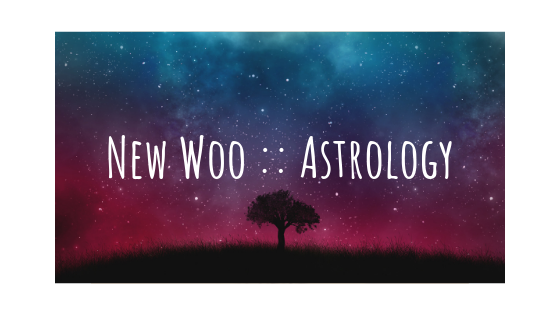 Ever since the prepubescent golden days of reading YM and Seventeen in my dark bedroom by actual-flashlight, way back when printed magazines came in the actual-mail along with our twenty-two Columbia House CDs, I have been obsessed with astrology.

Okay, obsessed might be a strong word, especially since I grew up in a fairly conservative home where watching The Simpsons and listening to bands that weren’t DC Talk were frowned upon, and playing Dungeons & Dragons in the neighbor kid’s basement was along the same lines of summoning demons with a candlelit Ouija board and some goat’s blood. I mean, I still did those things – with the exception of the demon summoning, I guess – but there wasn’t a whole lot of unsupervised time for a full-blown astrology obsession.

Although, now that I think about it, I did take several years of Latin in high school, so perhaps I could summon some demons. Hmm. That could be a skill that comes in handy down the road… Anyway, what I’m saying is: (nerdy) teens will be (socially awkward) teens. At least I wasn’t drinking in corn fields, right?

Regardless of the demons I did or did not summon, I loved horoscopes because as hokey as they were, they made me feel understood, and what teenager in the pre-internet age didn’t want to discover THAT? I’m a Sagittarius! There are more people like me out there? There are other real humans who just really get me and who are just as flighty and weird and foot-in-mouth-y as I am?! OH MY GOD HOW COOL IS THAT??

*preteen squeal at a decibel heard only by canines*

As I grew older, and as the the World Wide Web became a world-ier, wider, webbier, and more easily navigable entity, I started to look further than Cosmo for my astrological woo-fixes.

I’ve been following Lance at Skywatch Astrology for well over a decade. He posts no-nonsense daily astrological forecasts that are not directed specifically at your Sun sign, but that allow you to view the movement of the planets and stars through a larger lens. His “born this week”, monthly, and yearly forecasts are also particularly enlightening!

I know I said I gave up Cosmo, but their longtime Bedside Astrologer, Hazel Dixon-Cooper, is one of my very favorite astrology writers, and I have a whole stack of her hilariously written Rotten Day astrology guides next to me at this very moment.

As I got deeper into astrology than simple Sun signs and glossy-pages horoscopes, I realized I needed a natal chart. I have been running mine, and those of friends, from Cafe Astrology for years. Pro-tip: you can get yours for free here, but if you want to pay a teensy bit, they’ll send you an even more detailed chart that’s easier to digest in the event that you’re not an in-depth weirdo like some of us. And this thing is VERY detailed.

Now, all that being said, the only time I have really ever tried to use my astrological “influencers” to divine the future or make shit happen in my life is when I was trying to get pregnant. Depending on how you came to this blog and how well you know me from my pre-woo-writing days, you may remember some of the desperation involved in that particular pursuit. I don’t believe I ever really found anything specific that made me think my stars were involved in how I came to be a parent, but sometimes just reading an astrological forecast, or a horoscope that was vaguely hopeful, brought me some serenity during some very tumultuous times.

Since I’m on this new woo journey, I thought maybe astrology would be a cool addition to my otherworldly repertoire. I’m in the process of revisiting and reviewing my natal chart now, as well as dusting off and exploring some of my old astrology books for answers about my past and present, and clues as to what lies ahead in my future.

I also selfishly want to know how many Sagittarians are also Ravenclaws. Caw caw, motherfuckers.

If you are an old pro at astrological readings, let me know! I’d love to hear more from seasoned stargazers! I’d also love to hear your stories of having your stars read professionally – were you able to find out something unexpected? Did you use any of that information to make changes to your life? Do you think your stars have an impact on your path through life? Tell me EVERYTHING.

As always, thanks for stopping by! Be sure to watch for my next post because you’re really going to want to know how the OMG SUPER WOLF BLOOD MOON is going to impact all of us!